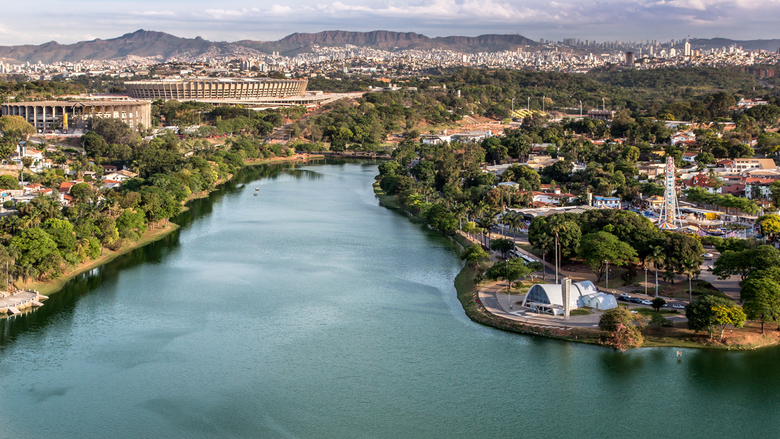 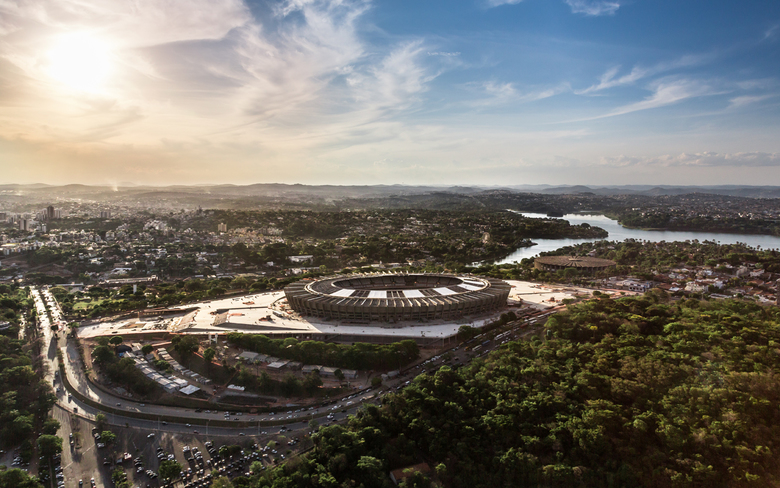 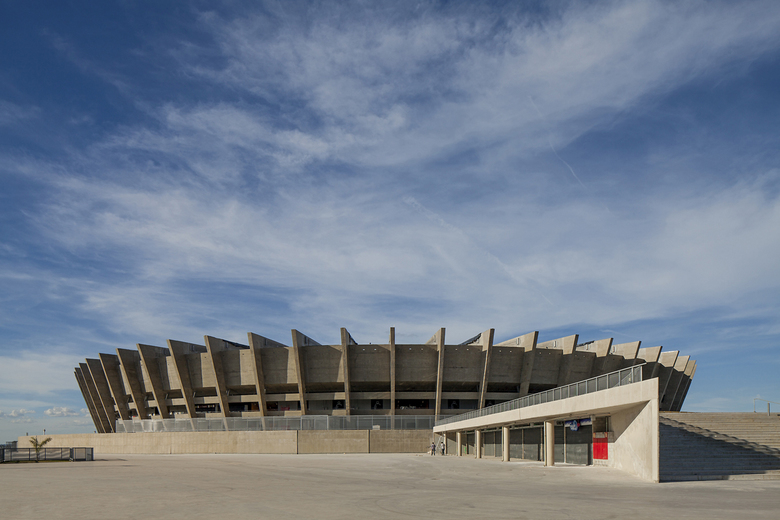 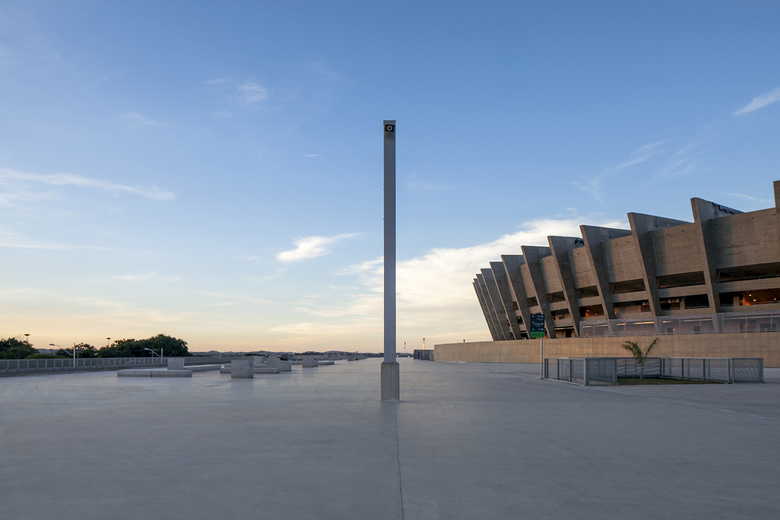 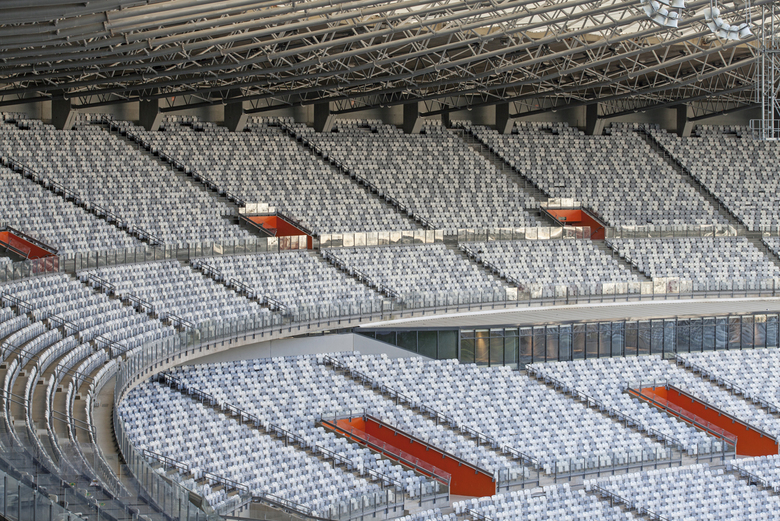 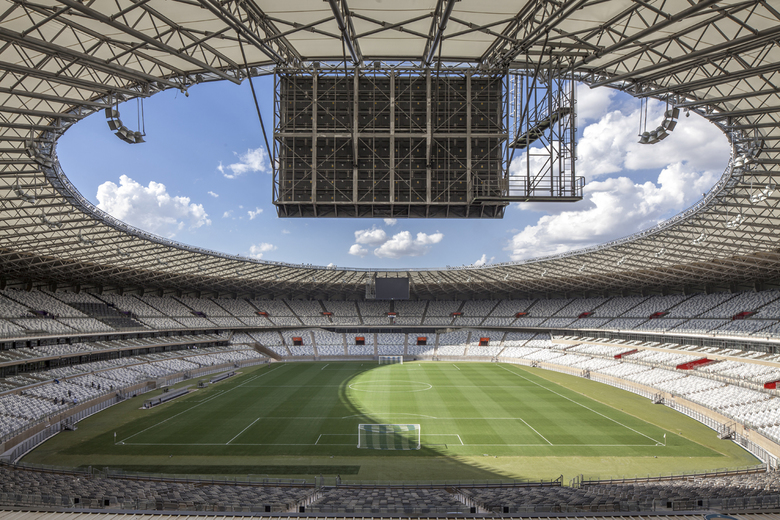 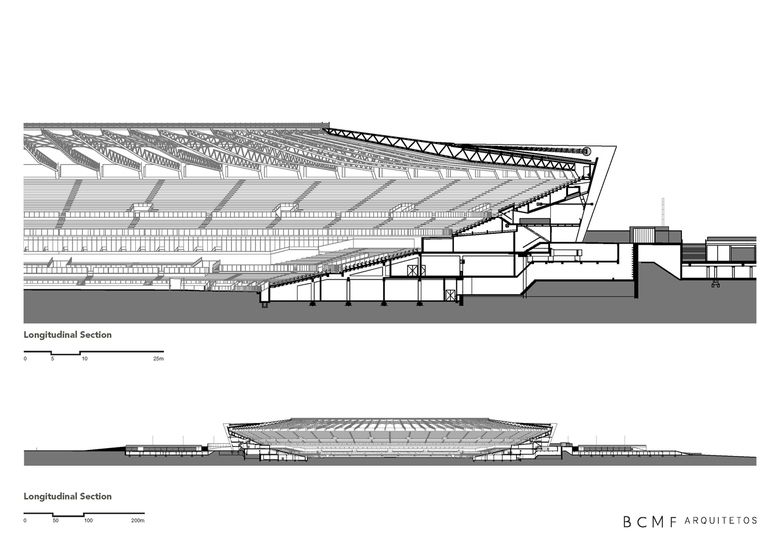 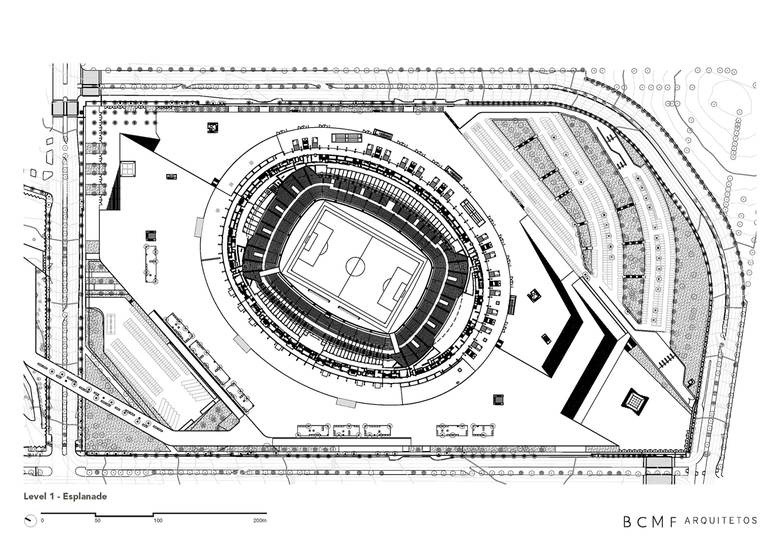 A STADIUM TO THE CITY

Belo Horizonte. A modernist building in a modernist landscape.

Mineirão Stadium and Pampulha neighborhood were conceived during the 40´s, at the beginning of the structuralist fever that would conduct the economic policies of Brazil during the following decades. Not by coincidence, Pampulha´s mentor was Juscelino Kubitschek, then mayor of the city of Belo Horizonte, Minas Gerais, who granted commissions to vanguard professionals such as young Oscar Niemeyer and Roberto Burle Marx to capture the essence of his modern envisions. Quite a successful essay for his Brasilia from 1960.

Mineirão was inaugurated in 1965 as the second largest football stadium in the world, with a total capacity for about 130 thousand people. With its rhythmic structure of reinforced concrete and its monumental proportions, a design by Eduardo Mendes Guimarães Junior and Gaspar Garreto, it immediately became an icon in the landscape. Today Niemeyer’s buildings, Burle Marx’ gardens and Mineirão Stadium are heritage listed.

At the time of its construction, Pampulha was a secluded neighborhood, miles away from Belo Horizonte’s consolidated fabric. Now it is within the city limits and actually lies on its expansion axis. Despite of having good infrastructure, the area still lacks urban facilities and a better offer of services.

As Brazil was chosen to host the World Cup 2014, opportunity came about to transform the stadium into a multifunctional sports complex, a tendency that underlies the design of contemporary stadiums: to offer a variety of services that allow the building to become a focus of attraction to its neighborhood and to the city, ensuring its economic sustainability.

The instrument chosen to make this operation possible was a public-private partnership (PPP), which determined that the redevelopment of the stadium would be undertaken by a company which, in return, would be granted its use for the next 25 years.

The winner of the bid was Minas Arena Consortium, which invited BCMF architects, renowned for their expertise in sports architecture, to be responsible for the executive project of the New Mineirão, (BCMF architects had previously designed the Deodoro Complex for the Rio 2007 Pan-American Games, plus most of the concept studies of the winning bid for the Rio 2016 Olympic Games.

The task was to review the basic project used as a term of reference for the bidding (by Brazilian GPA&A and German GMP), and to deliver a new design for the stadium, in accordance to the demands of the consortium and of the PPP policies. Innovations ranged from responses to new requirements from FIFA and other technical guidelines, to new concepts to integrate the building to its surroundings context and to enhance the commercial potential of the complex, including the complete redefinition of the external architecture (“esplanade”) and of the roof extension. All of this taking into account a tight schedule.

Changes inside the stadium respond to FIFA´s requirements: accesses, security, capacity, visibility, press areas, athletes’ facilities, logistics, etc. The extension of the roof is critical to the comfort of the audience both inside the stadium (weather protection) and outside of it (to prevent dark-light contrasts during broadcasting).  Externally, the site – previously used mainly as an open air parking area– had to be completely redefined in order to create conditions of access and general support to the stadium and to enable the business operation defined by the PPP model.

An analysis of the typologies of sports stadiums, which had new programs added in recent decades, reveals a tendency of having these placed outside of the arena. Two typical expressions are in this respect: either a podium is added to the stadium, meaning a platform at its base – such as in Green Point (Cape Town, South Africa), Allianz Arena (Munich, Germany), and the newly inaugurated Castelão (Fortaleza, Brazil), among others – or a vertical volume is added to it, together forming a compact whole – as in under-construction Itaquerão (São Paulo).

Since Mineirão is a protected building, the addition of new program could be solely made through the insertion of a platform at its base. The great innovation BCMF delivered has been the way of articulating this platform both to the city and to the stadium. Subverting the classic notion of a podium, which refers to a horizontal building with a flat top surface (as in the examples mentioned above and on the basic project for Mineirão), this platform is carved on the ground and shaped accordingly, creating semi-public squares set at different levels.

Two main squares (North and South) are connected to their surroundings, being perceived as a continuation of the city’s ground. Gentle slopes and inclines, flanking staircases with grandstand proportions, provide universal accessibility to all points, including the arena. Users approach it gradually, finding many plazas on the way. From one of these plazas departs a pedestrian connection to Mineirinho Gymnasium, suspended over the existing road.

This artificial topography is thus intended for the flow of pedestrians – and crowds. Meanwhile, floors underneath host an intricate network of flows and operational areas, alongside purposes demanded by the PPP model (commercial and institutional areas) and the government (Football Museum, health center, small claims court). Therefore, the front of house, set above, is separated from the back of house, below, through a vertical sectorization (cross-section), associated with the traditional horizontal one (plan).

Utimately, however, these two worlds do meet: shop facades emerge on the esplanade in points strategically chosen to activate it. Together with an amphitheater formed by the staircases and intent to promote public events and activities, these shops should ensure the flow of users seven days a week, contributing to the vital quality of the urban experience in the neighborhood and to the business profitability for the operator.

Of the existing arena, structural frames, roof slab and upper tiers, all protected, were kept. Intermediate and lower tiers were demolished and the pitch was lowered by 3.40m, achieving FIFA´s sightline requirements. The stadium was furnished with 62.160 sturdy ergonomic new seats, colored in three shades of gray that generate an unusual pixilated effect, creating a neutral background for the vibrant colors visual communication project, signed by Hardy Design.

The extension of the roof was completely redefined. Engineers from Engeserj concluded that Mineirão´s strong and solid skeleton could – and should – participate on the extension’s structural system. The mix system keeps pace with the stadium’s 88 concrete frames, loading on them, creating 26m of new cantilevered coverage.

First step was to relieve stress at the beams with hydraulic jacks and steel cables. The structure was lifted, neutralizing the 30cm that it had subsided throughout the years. In fact, it was pulled a few centimeters more, a bit higher than its original level so that, with the new loads from the roof extension, the final result would resemble the conditions of the stadium’s first days. Then, pillars and beams were reinforced with bracing systems composed by steel plates and cables. Flat trusses composed of steel pipes were inserted one by one, after joint pieces were concreted next to each of the pillars. Finally, a self-cleaning membrane was laid on top of the new coverage.

The whole area above the existing slab received a network of solar panels that will produce enough energy to serve about 1,200 single-family houses: the stadium will make this power available to the public network, and collect it back whenever needed for its own use. Rainwater is being collected and used. About 90% of the demolition spoils were triturated and reused as aggregate in the new concrete, and old lawn and chairs were donated to other stadiums.

Mineirão Stadium points out ways in which sports mega events can leave a lasting legacy to the host cities. Here, even though interventions are made on a building scale, they respond to the demands of larger scales, such as the neighborhood, the landscape and the city itself. The new program is incorporated through the creation of new semi-public spaces and plazas. Thus, the urban domain is invited into the realm and scope of the Stadium.